*throws confetti into the air*

Yay! You can buy a physical copy of Burning Space right now on Amazon for $14.99!

Below the picture I have featured the synopsis and the first few pages from Chapter 1: The Hero. Beware of spoilers if you aren’t caught up in the trilogy!! 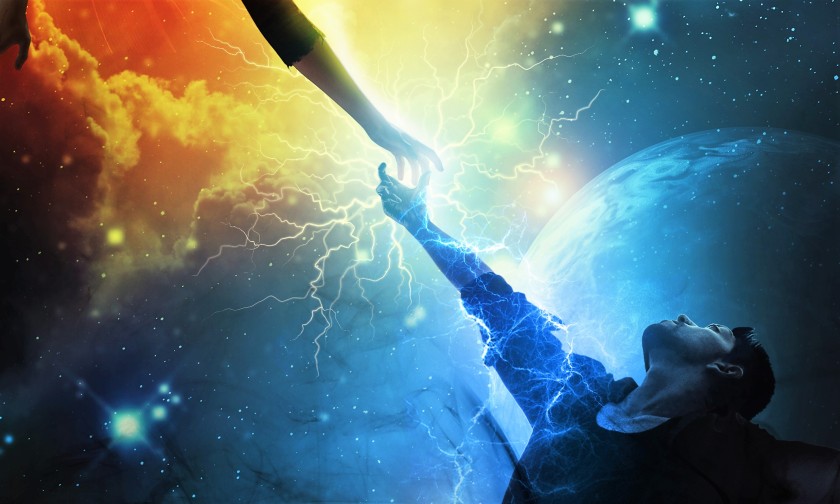 A NEW ORDER IS RISING…

Kandi failed to protect Earth, Juan, and her true name. Now she serves under the control of TIME, who wishes to manipulate all mortals into serving him, thereby granting him the power to conquer worlds without end.

Juan is a Hero in some circles and a traitor in others. For over a decade he has been a slave on an alien world, and he has lost any drop of hope he had left after the demolition of Earth. It is not until the announcement of a new Monarch who shall reunite the last Six Worlds that a spark of hope returns within him. When LEISIL, the new goddess of Appetite, chooses him as her Mate, the spark is once again snuffed from existence, and it is all he can do to simply survive day to day.

The galaxy is in peril, and only Kandi and Juan together can save it. Unfortunately, every immortal being is working tirelessly to pull them farther apart. It is only a matter of time before DARKNESS, an entity which grows parallel to the willful depravity of souls, consumes the very source of light in the cosmos. Will Kandi be able to break the bonds of Time and save all mortal souls? And will Juan be able to muster hope in an ever-darkening world?

EXCERPT FROM CHAPTER ONE: THE HERO

The Day of Combat (ENTO)

Ento always knew the human hybrid was more than he appeared. Despite his relatively small size and unusual skin tone, Juan (or as many call him, Aun, since his name is difficult to pronounce) is a force to be reckoned with. Ento was the first to reckon with said force when he met him in Jarbakül, the Slaver’s Capital on Bynivul. It was Juan’s first day on new soil.

He looked blearily at his unfamiliar surroundings. The transporter hovered past the trees behind him, blowing his black hair and summoning more moisture to his eyes. He was dressed in common human-wear that drew attention to his skinny legs and left the neck completely bare. The boy appeared unable to breathe. Ento walked across the flat, paved courtyard to shake the human from his stupor. The humans behind the boy backed away in fear, while Juan remained still, carefully absorbing the environment. As the boy watched the transport zip out of sight, Ento noticed the mark on his throat. He has been cleansed, Ento thought, puzzled. This was the first human he had encountered to have undergone the ritual. It was a grisly process that involved slicing the victim’s throat, draining him of all his blood, praying over the blood to “purify” it, and transferring it back into his system. It was a procedure required for all potential Mates to endure. The gods could not mate with any mortal, after all.

Why was Juan chosen for cleansing?

The courtyard was soon bustling with slave traders and Lords anxious to take their pick of the new meat. This shipment was all human, mostly adult males. One adolescent female was already stolen away by a trader affiliated with a cult known for its unhealthy obsession with the Deioïn Bloodline. The female screamed as she was carried off into the towering marble structure at the opposite edge of the clearing. Like the other new slaves, she was to be tagged, bathed, groomed, fed, and evaluated by the Lords. Once evaluated, a price would be branded into her arm, and she would be kept within the Slave Tower until purchased and shipped to another center of trade.

Ento knew Juan would be singled out in seconds, so he made sure he nabbed him first. The boy was not like the others. He was cleansed, he was sturdy, and his eyes matched the Appetite Bloodline, which led Ento to think he might be a notable figure to humans… Perhaps a prince. He would be expensive.

Ento grabbed the human’s arm and pulled him toward the tower. He wasn’t surprised when the boy resisted. He was surprised, however, by the strength of the resistance.

Ento looked down at the human. There was pain in his eyes. Real, raw, unadulterated pain. It dawned on Ento that Juan would not willingly follow him.

“I will not hurt you,” Ento promised, tugging the boy’s arm again.

Before he could anticipate anything, Ento was on the ground, the wind knocked out of him.

The human said something in his native tongue and knocked another trader on his back. Other traders gathered to take the human, some with electric rods. Ento feared the boy would be harmed beyond repair, which would knock his price down a notch, so he quickly rose from the ground and rushed between the traders and the human, arms spread. “Do not harm him!”

“You have no claim on the human, Ento,” a trader by the name of Rüt said, pointing his rod at the slave.

“His value will decrease if a single hair is singed, Rüt,” Ento argued.

Suddenly, Rüt lost his electric rod and fell to the ground. The human stood above him, cracking the rod over his knee. He looked crazed now, poised for a fight, and Ento knew the boy was more than human. Humans were generally slower and weaker than Edinön, whereas this particular specimen moved faster than his eyes could track and managed to break an advanced piece of machinery in half with his bare hands.

A burst of light nearby drew the crowd’s attention from the boy to an indistinct, shadowy figure that only took a corporeal form after a few blinks. The newcomer was obviously Appetite itself, disguised as an impossibly attractive Edinön female with golden hair and red eyes. Her garment glittered like the night sky and clung to every feminine curve. She tossed her head back and walked toward the boy, leaving a trail of red flame blazing across the soil.

Ento had already forgotten about the human prince.

“This one is mine,” Appetite said, gazing at Ento directly. Ento’s throat shrunk.

The human collapsed to his knees, hands shaking. “Kandi?”

Appetite lifted him up by his arms and caressed his face. She spoke human words to him, which instantly calmed him. Ento could not believe his eyes.

She smiled seductively at Ento and said, “Ento, you are coming with me as well.”

Ento lowered his gaze to her feet. “I am not a slave, Leisil.”

She pulled him forward by the golden tassels on his collar. Ento could not tear his eyes away from hers as they changed from red to green. He inhaled a scent manufactured specifically for him. It twisted his insides and rewired his brain. His sole purpose was to please her. He was hers, and he realized she was the piece of him he’d felt had been missing all these years. His life was complete. His soul was whole.

The world darkened around her flawless form. Her ruby red lips curved, and she released a sigh so blatantly sexual he nearly burst with ecstasy. A thread of consciousness insisted that he was not a slave. He was a trader. He was a master.

“Not a slave,” he heard himself whisper, even as the heady fragrance weakened his knees. Not a slave…

Appetite hummed. “You are to me.”

Ten years later, Ento watches the annual Combat competition commence from the slavers’ booth, a platform hovering close enough to the pit that the spectator screens on either end are unnecessary. He is Juan’s handler. His job is to keep Juan alive, healthy, and valuable. With Appetite’s permission, he entered Juan into this annual competition because it would reflect well on Appetite’s slave house and Appetite herself if a slave sponsored by her won. If Juan wins, the slave house will be rewarded 100 more slaves, 50 spools of golden thread, and other delicious prizes. If he loses, he dies.

Ento has grown fond of Juan over the years. He certainly would not enter his name if he thought he would lose.

The pit was created a thousand years ago when the gods left and the War began. Combat began as a way to settle land disputes and gradually evolved into a form of entertainment. Without actual gods to worship, Bynivul-dwellers started worshipping the winners of Combat, dubbing them Heroes. The Heroes of Combat were immortalized in statues, murals, scripts, and monuments throughout the world.

Eventually, as slave trading became commonplace, Combat was used as a form of punishment, then as a game for slave traders, Lords, Ladies, and other wealthy individuals to enjoy every year. The names of each victor are now written on the tablet in the Combat gallery, and the owners they represent are rewarded generously.

Ento doesn’t care for the wealth as much as he does the fame and the possibility that Juan will be freed. If Appetite sees potential in him, she might promote him to soldier or trader. Anything could happen.

He sits on the edge of his seat, anticipating the first contenders to enter the pit via the portal in the center. Nearly 100,000 people are cheering and placing bets in the pods surrounding the arena (millions more watch on the screens at their homes). The weather is perfect – crafted especially for this occasion – dewy, cool, and breezy. The names and faces of each contender are flashing on the curved screens. Ento’s long-term female partner, Weida, grasps his hand and leans forward. “What did he say to you before you sent him to the pit?”

Weida cares about Juan almost like he was her own child. She resents Ento for giving Juan’s life away so easily. He hasn’t yet been able to convince her that they are about to make a fortune.

“I told him he would win,” Ento replies.

She rests her face on her pale hands. The pink flower petals in her auburn hair gleam silver in the moonlight.

Ento rubs her back. “He will win. I promise.”

She shoves his hand away. “You can’t promise that.”

A voice on the monitor announces the first 10 contenders. Weida whimpers when Juan’s name is listed among them.

Ento peers closely at the pit below. The black light of the portal is spinning more rapidly. It is about to open.

The crowd is sufficiently rallied. Ento uses vocal command to activate the shield around his booth in order to block out the noise. “Come on, Juan,” he whispers, willing his boy to appear.

The portal opens. Each slave is pulled into the arena by half-naked females of every color – blue, violet, green, red, gray, white, black, etc. – with leashes attached to their collars. Contenders must fight in skin-tight armor decorated in gems that represent the color of their sponsor. Juan’s collar and sleeves are encrusted with rubies. His hair has been trimmed to an inch above his scalp and tamed with product. So far, he is the only contender free of face paint and other aesthetic enhancements.

He is also the smallest.

Ento glances at Weida and pats her forearm. “Don’t you want to watch this, ela?”

She peeks through her fingers. “Just tell me when this is over.”

The devices recording the event zoom in on Juan’s face. The announcer provides a brief background and description for each slave while the female escorts unfasten the leashes and exit through the portal.

Ento rubs his hands together. “It has begun.”

Currently writing an epic sci-fi/fantasy trilogy called Secrets of Volenin. The first installment, Gray Haze, is in the second draft.